December 31, 2018 – A small bird that is very difficult to see without snow cover, flocks of the Lapland longspur are in our area for the winter. The Arctic bird is easy to spot after a heavy snow. They can be seen in numbers foraging along the windswept and plowed roadways for wild seeds and spilled grain. I counted 50 in several large flocks, that I only noticed because they were flushed from the snowless landscape south of Aroma Park during the Christmas bird count this past Saturday. Keep your eyes open for these long distance migrants in and around the agricultural fields along with another visitor from the north, the beautiful little Snow bunting.

December 18, 2018 – The loud hammering sounds catch my attention, movement and a flash of red draw my eyes towards the trunk of a tree where the drummer, a female Pileated woodpecker, is focused on her search for insects. Chips of bark and fine splinters and bits of wood could be seen flying away from the tree as she chiseled with deliberate and powerful strikes into the storm damaged remains of the deformed snag this past week just south of the Kankakee river. The crow-sized Pileated woodpecker also known as the Log-cock is probably the largest woodpecker North of Mexico, and I say probably because the Ivory-billed woodpecker that once flourished in the southeastern parts of the United States and Cuba is larger and is still listed as a ‘critically endangered’ species. There are hopes of rediscovery of the Ivory-billed woodpecker, encouraged by the debated sighting in Arkansas in 2004, but according to the Cornell Lab of Ornithology it is most likely extinct making the Pileated the largest. 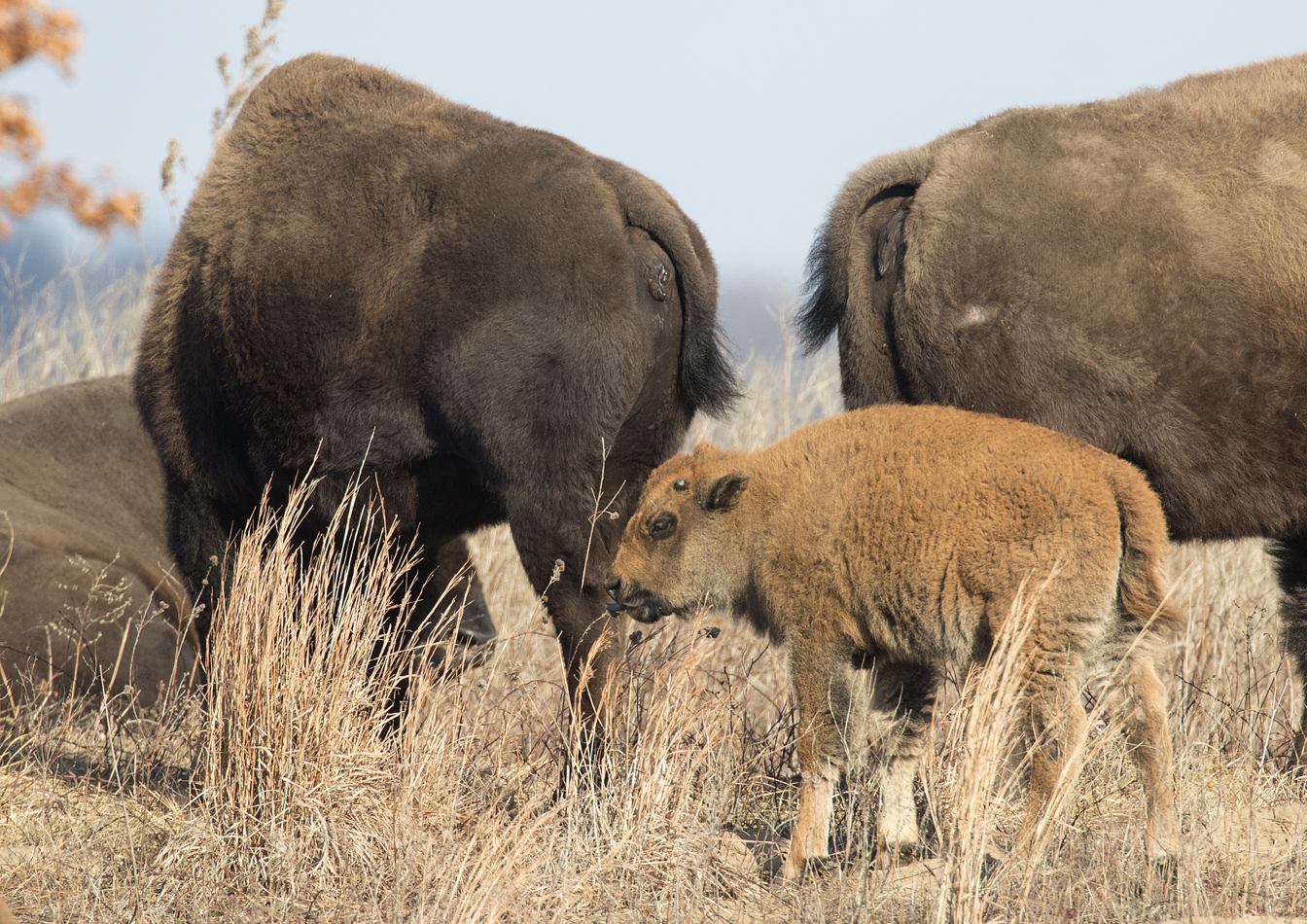 Photo taken on December 12, 2018 of a Bison calf at TNC Kankakee Sands.

December 12, 2018 – The late season birth of a bison calf just recently discovered at The Nature Conservancy’s Kankakee Sands in Newton county Indiana stays close to its’ mother on a cold but sunny December day. A small group of mature bulls could be seen grazing and resting in a northwest part of the north pasture, but the bulk of the herd was on one of the sand hills, near the remains of Bogus Island, where they had a nice southern exposure to the morning sun. The other young bison that were born in the spring, now looking somewhat like small adults, seemed to be enjoying the sunshine as they butted heads and rolled in a dusty wallow, at times completely covering their furry faces in a dusty mask. The new calf in its’ cinnamon-colored coat stood out as it walked across the hill not venturing far from its’ mother. Ted Anchor, the Project Manager at the Kankakee Sands, says that this late birth is uncommon but not unheard of. Anchor also reported that 16 calves were born during the spring and the bison herd at The Kankakee Sands is now at 50+. More information on The Kankakee Sands can be found at https://www.nature.org/en-us/get-involved/how-to-help/places-we-protect/kankakee-sands/

December 9, 2018 – Perched on a steel cable above a grassy area a Rough-legged hawk, a large raptor of the high arctic during the summer, keeps an eye out below for prey. The photo shows the feathers covering the legs, extending down to their small feet. The tip of the beak is stained red from a recent kill. The Rough-legged hawks have migrated south out the Arctic and are now on their wintering grounds. The wintering ground of the Rough-legged hawk includes most of the United States, minus the states south of the Ohio river and East of the Mississippi. According to The Cornell lab of Ornithology these wintering hawks feed mostly on voles, mice and shews while in our area of Illinois. I have personally witnessed them on the carrion of a rather large mammal a few winters back. With a wingspan of over 4′ they can’t be missed as they hover and glide over the farm fields and prairies. Watch for them perched on utility poles or on the small branches of trees or even sitting on the ground throughout the winter months.