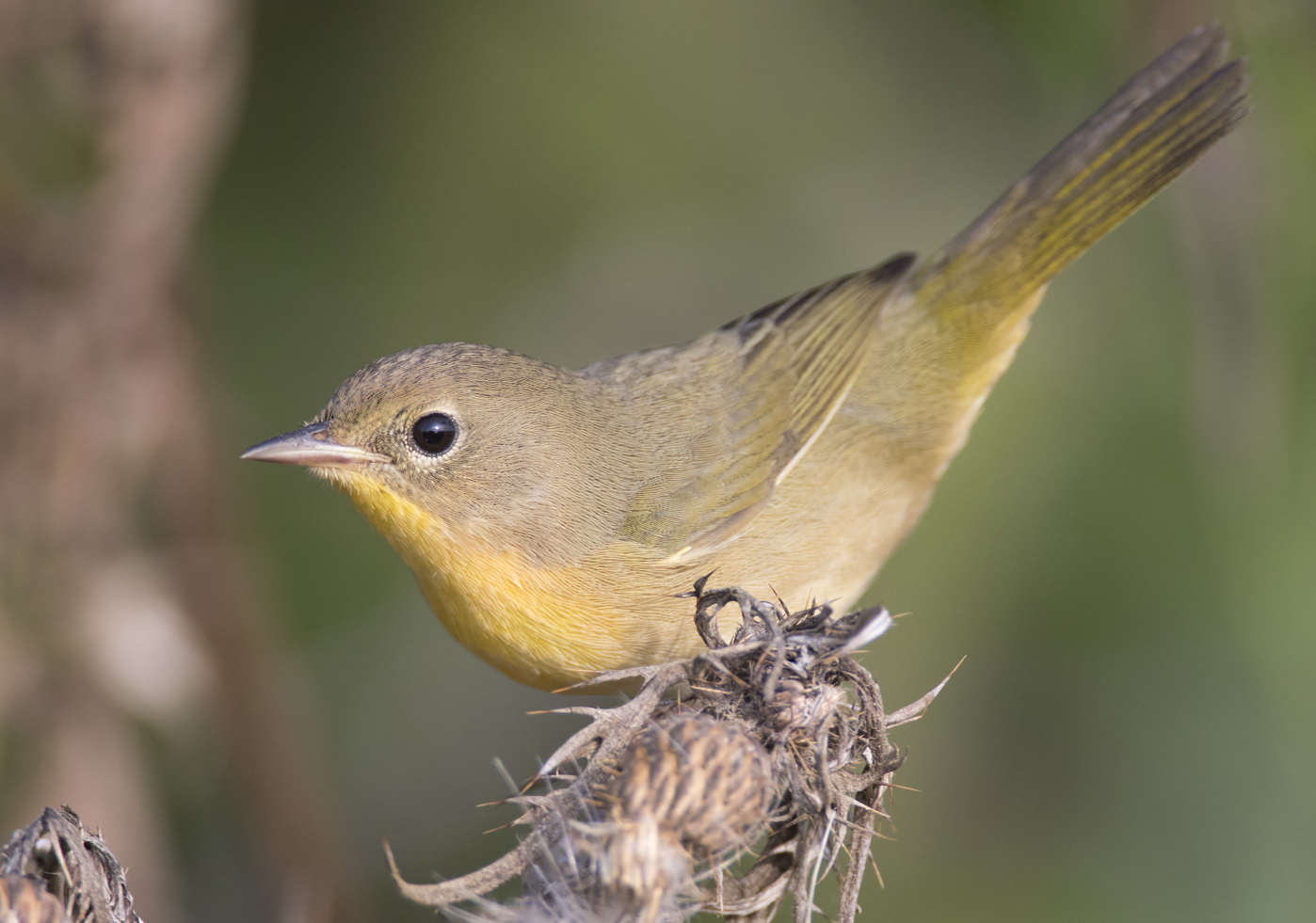 September 13, 2018 – A female Common Yellow-throat warbler pauses for only a moment atop some dried thistle standing at the edge of the thick undergrowth. Quickly the little bird vanishes into a maze of green as she searches for insects on top and below every leaf she encounters, at times revealing her location as she flutters from branch to branch in her quest. 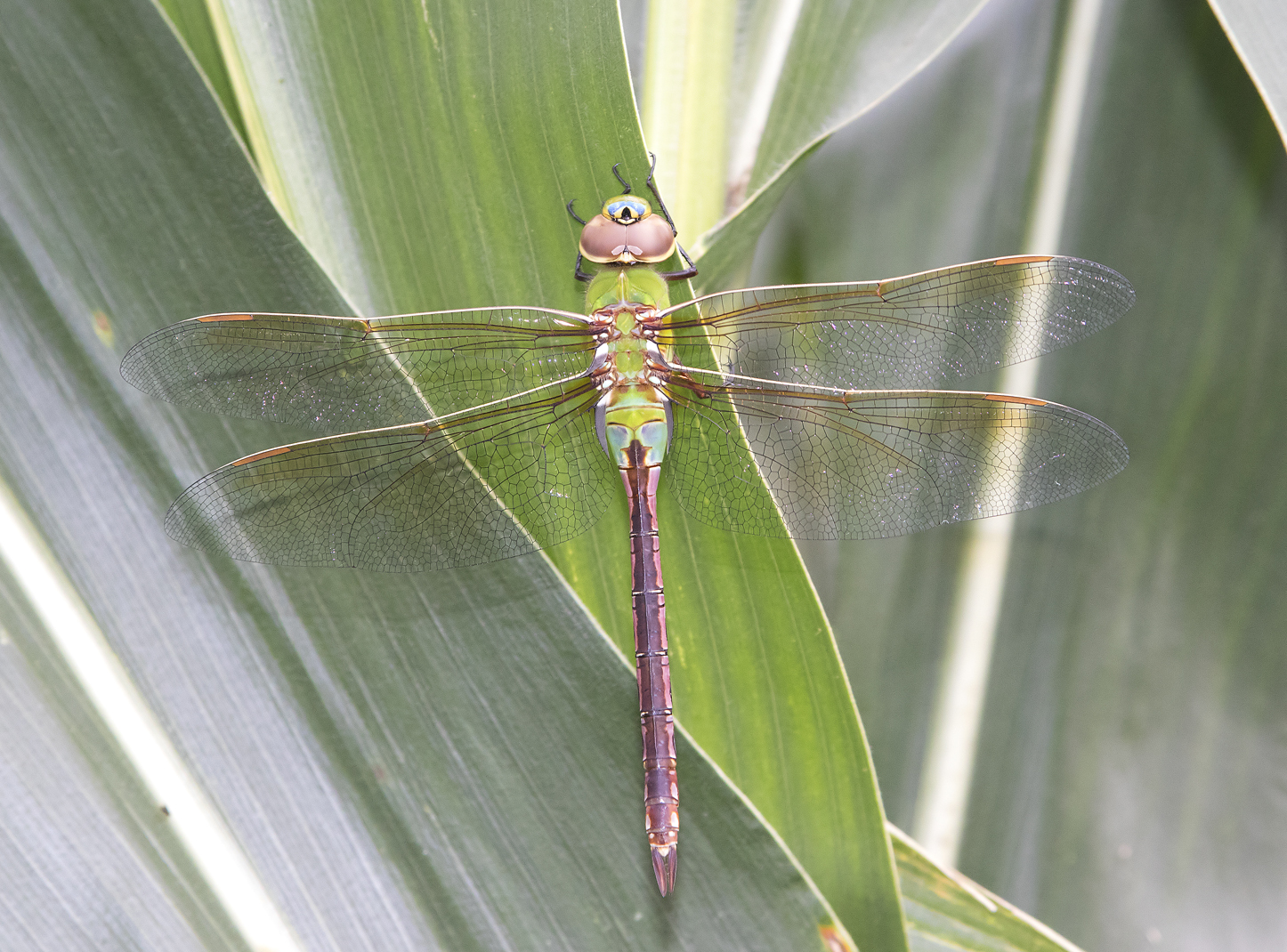 July 22, 2018 – The dragonfly has had its’ place in the myth and symbolism of humans for thousands of years, both good and evil has manifested in the folklore and the art of both prehistoric and modern humans. From the primitive cave paintings to the Art Nouveau dragonfly pendants there is no denying that their beauty is an inspiration. Their evolution began over 300 million years ago, as some fossil records show amazing giant dragonfly like insects with wingspans of over two feet. But from a different path millions of years ago our modern dragonfly evolved. The modern dragonfly is much smaller, the largest dragonfly in North America is the Giant Green Darner of the Southwest that has a wingspan of around five inches. Here in Illinois we have the Common Green Darner that looks similar to the Giant Green Darner but it is a little smaller with a wingspan of a little over three inches. The photo shows the Common Green Darner clinging to a corn stalk leaf where many others were feeding along a grassy road in rural Iroquois county. 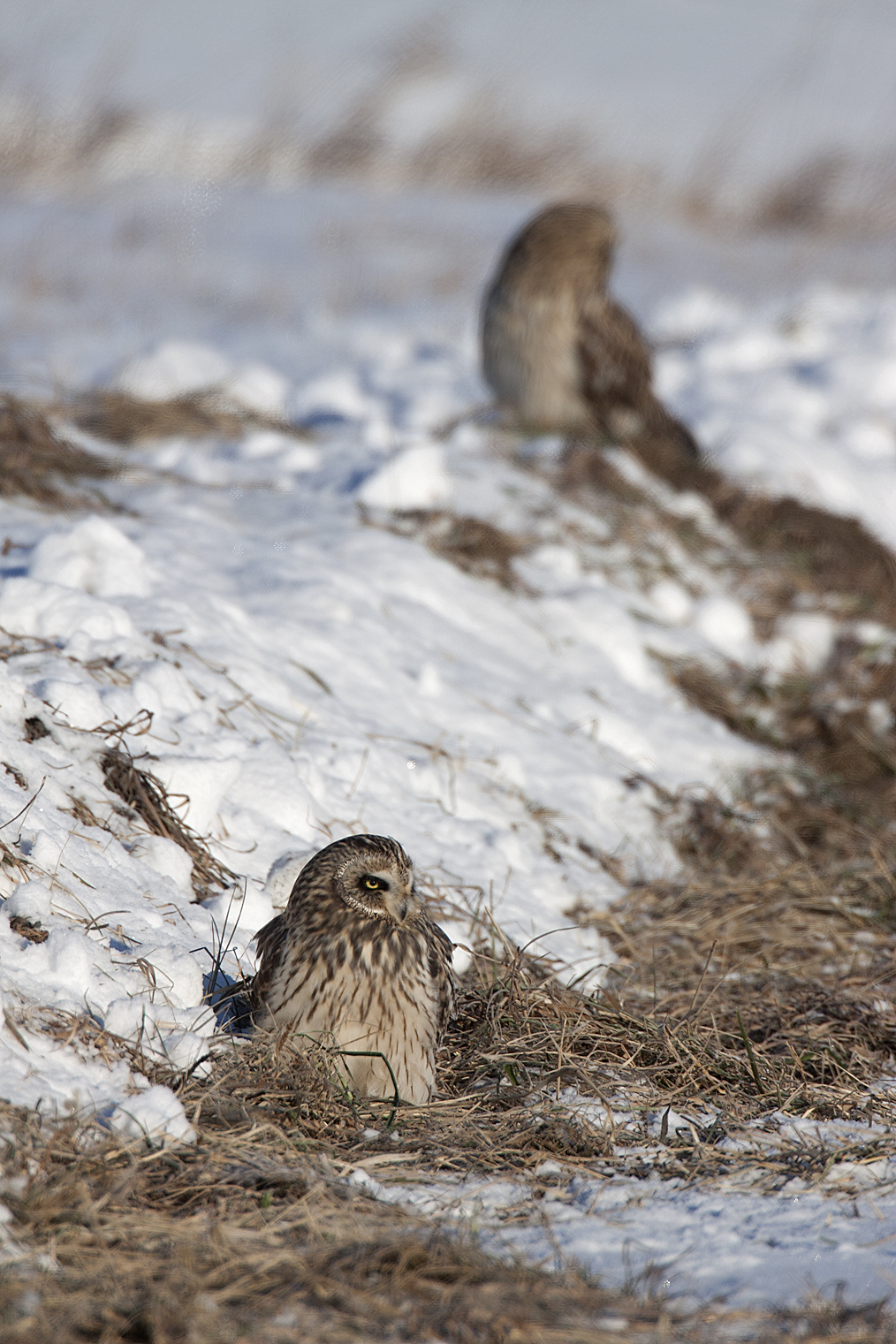 January 2, 2018 – Perched on the soft exposed dried grasses and using a snow bank piled up by a snowplow to reflect the morning sun three Short-eared Owls were soaking in a little bit of warmth on a bitterly cold morning in rural Iroquois county this past week. If a person is lucky enough to experience an encounter with a Short-eared Owl it would most likely be in that brief time at dawn or dusk while the owl might be perched on a fence post or gliding low over the grasslands searching for small prey animals. The negative temperatures with dangerous wind chills may have brought them to the edge of a less traveled country road in the late morning for some relief in the warmth of the winter sun. If not for the snow a person could quite easily pass right by these midsize owls and never see them. One can most certainly see from the photos how well the colors of the Short-eared Owls blend in with the dried vegetation they are sitting on. 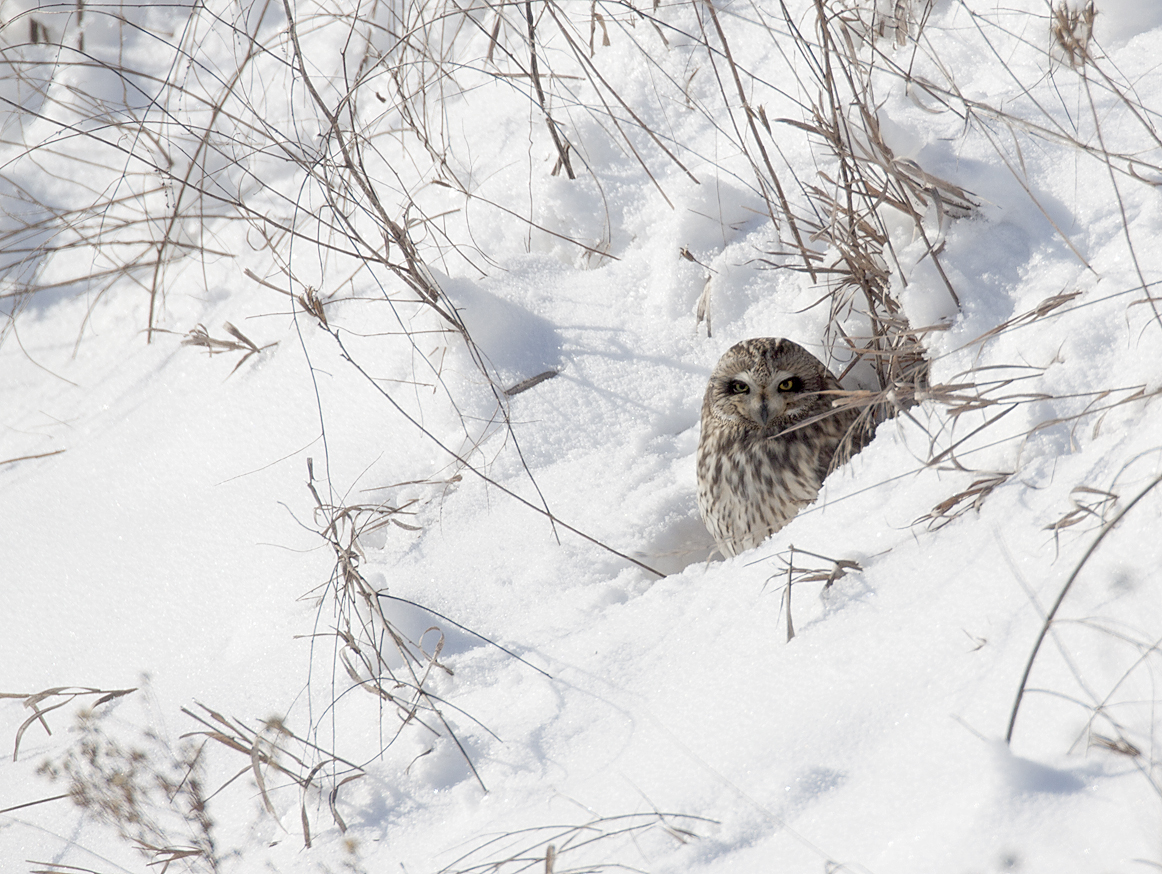 Short-eared Owl sitting in a small depression in the snow

During the winter months here in North Eastern Illinois is the best opportunity to observe the Short-eared Owl. Areas set aside for the Conservation Reserve Program (CRP) and restored prairies are good places to stake out in the late afternoon with binoculars and patience, scan the area for a perched or low flying bird that may be hunting over the grassland. The Northern Harrier and Short-eared Owl are very similar looking so it is a good idea to do a little homework before your adventure. The Nature Conservancy Kankakee Sands project in Newton county Indiana is a short drive east of Kankakee and is also a great place to see the Short-eared Owls hunting in the late afternoon over the dormant winter prairies. 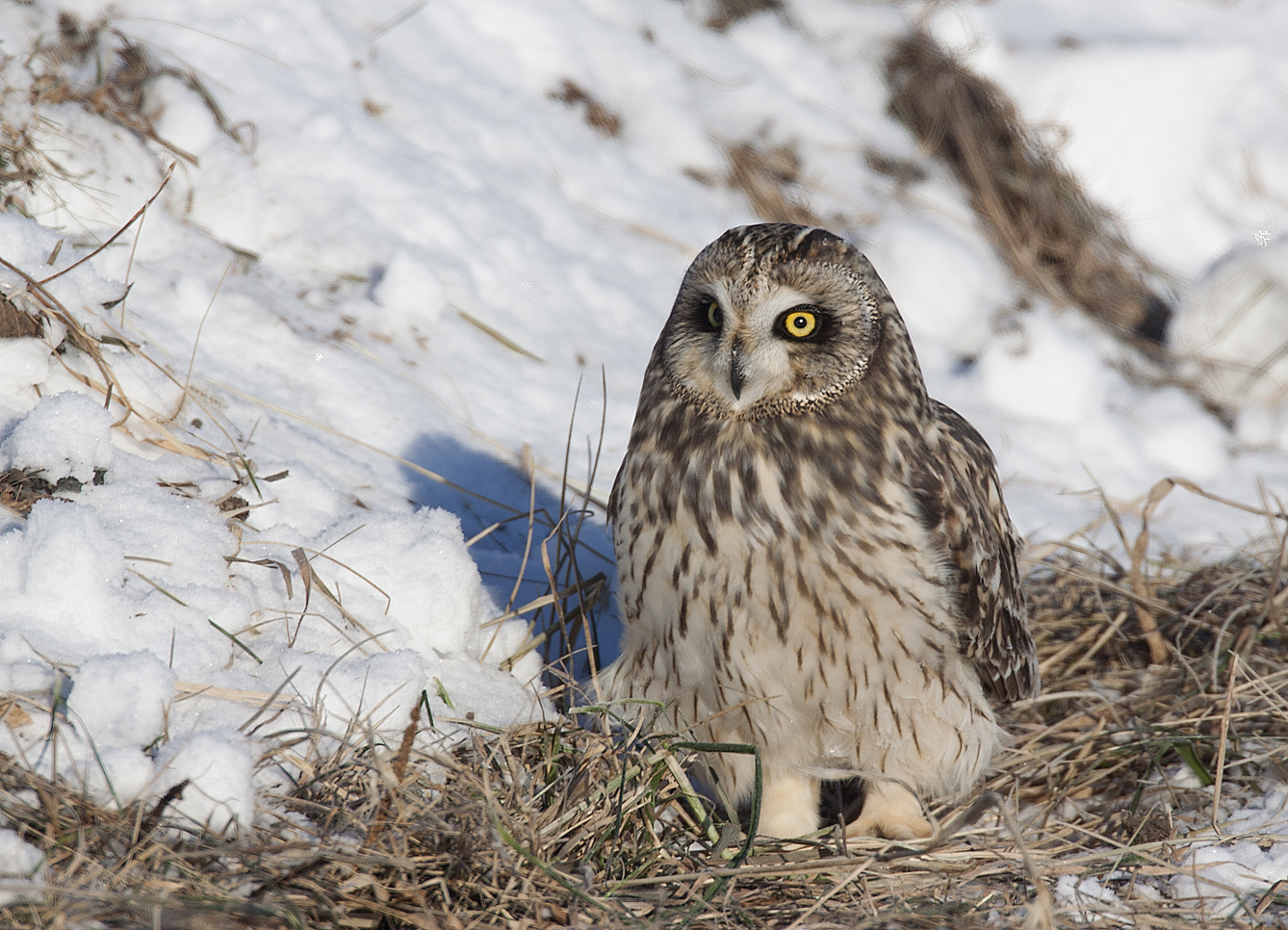 The summer range during the nesting season, from mid-March to May, of the Short-eared Owl overlaps their winter range in the northern half of the United States from the Great Lakes west to the Pacific ocean. The owls also nest in most of Canada and Alaska. Listed as an endangered species in Illinois the Short-eared Owls do nest in our state, most likely the northern half and in very low numbers with the exception of Prairie Ridge State Natural Area. Located in southeastern Illinois in Jasper county, Prairie Ridge State Natural Area boasts the largest population of nesting Short-eared Owls in Illinois while providing nearly 2000 acres of grassland habitat. In Canada and the United States the loss of habitat from agriculture and urban expansion, mining and the use of pesticides and dangerous rodent control methods can have a negative impact on the Short-eared Owl and other grassland raptors. 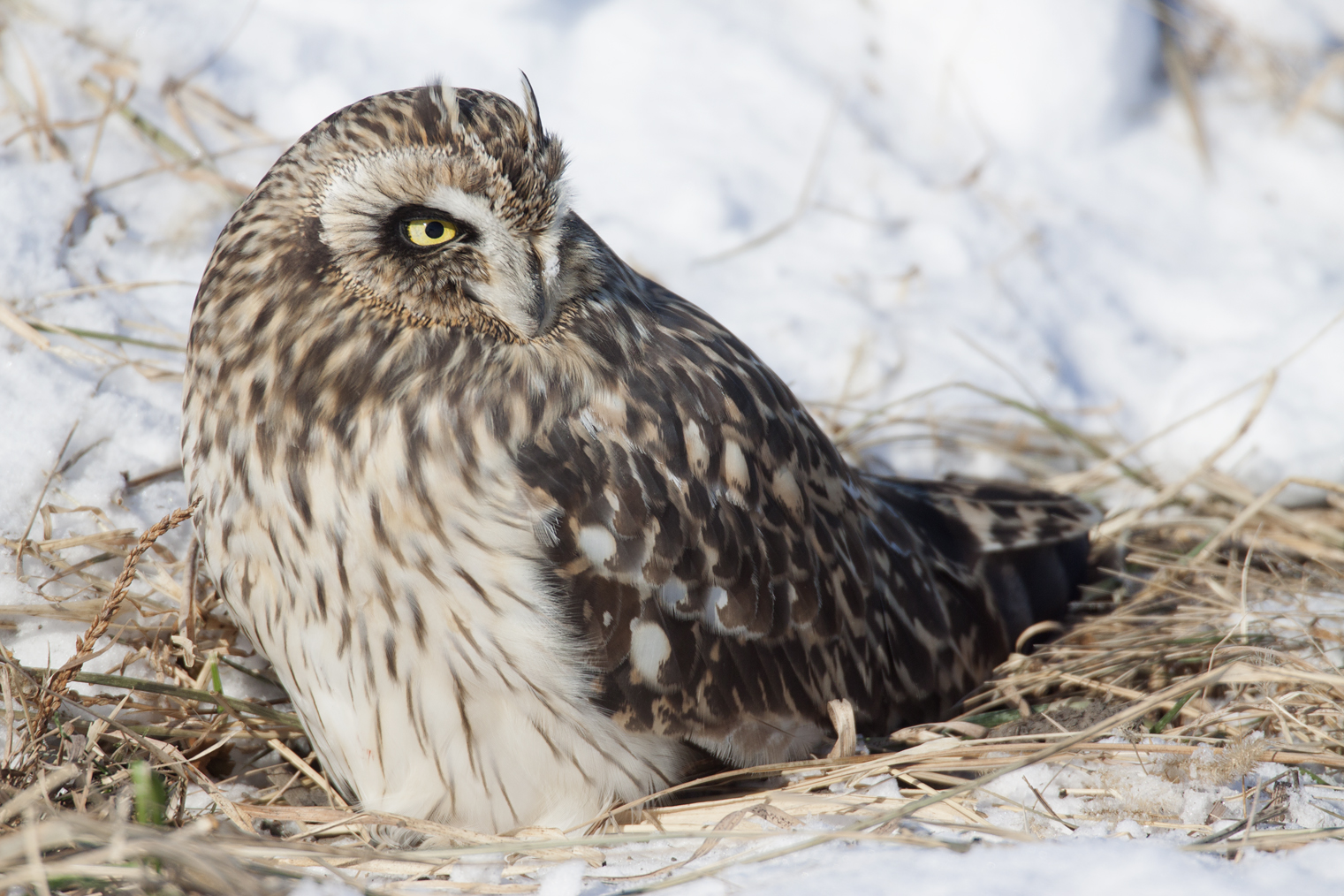 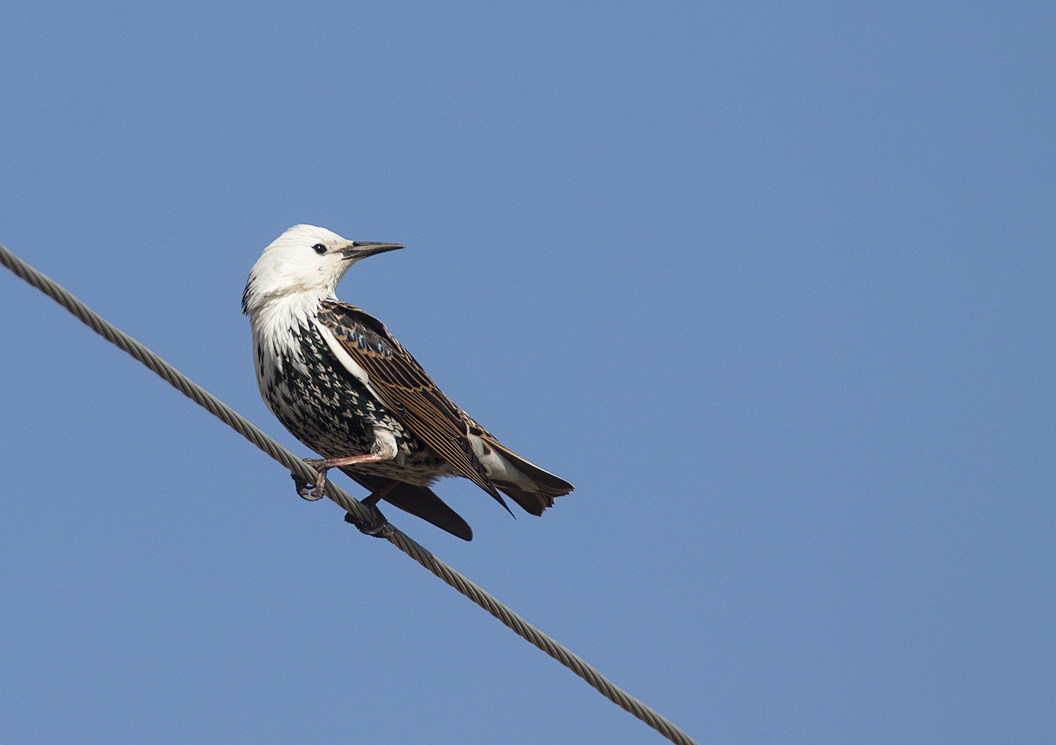 October 13, 2017 – A flash of white caught my eye as I was driving past a partially harvested field of soybeans in Iroquois county this past Friday the 13th. A flock of over 50 European Starlings were feeding on the ground near the edge of the field when I noticed the leucistic bird of the same species. Leucism is genetic condition that prevents melanin pigments to be deposited into the feathers properly. The lack of melanin pigments can cause a range of visible abnormality in the plumage color of birds. The results of this condition can manifest from an faint washed out look barely showing any semblance to a birds normal strong color patterns, to showing just small patches of white feathers lacking pigment. In some cases the affects of leucism can even produce a white bird that appears completely devoid of any plumage color. 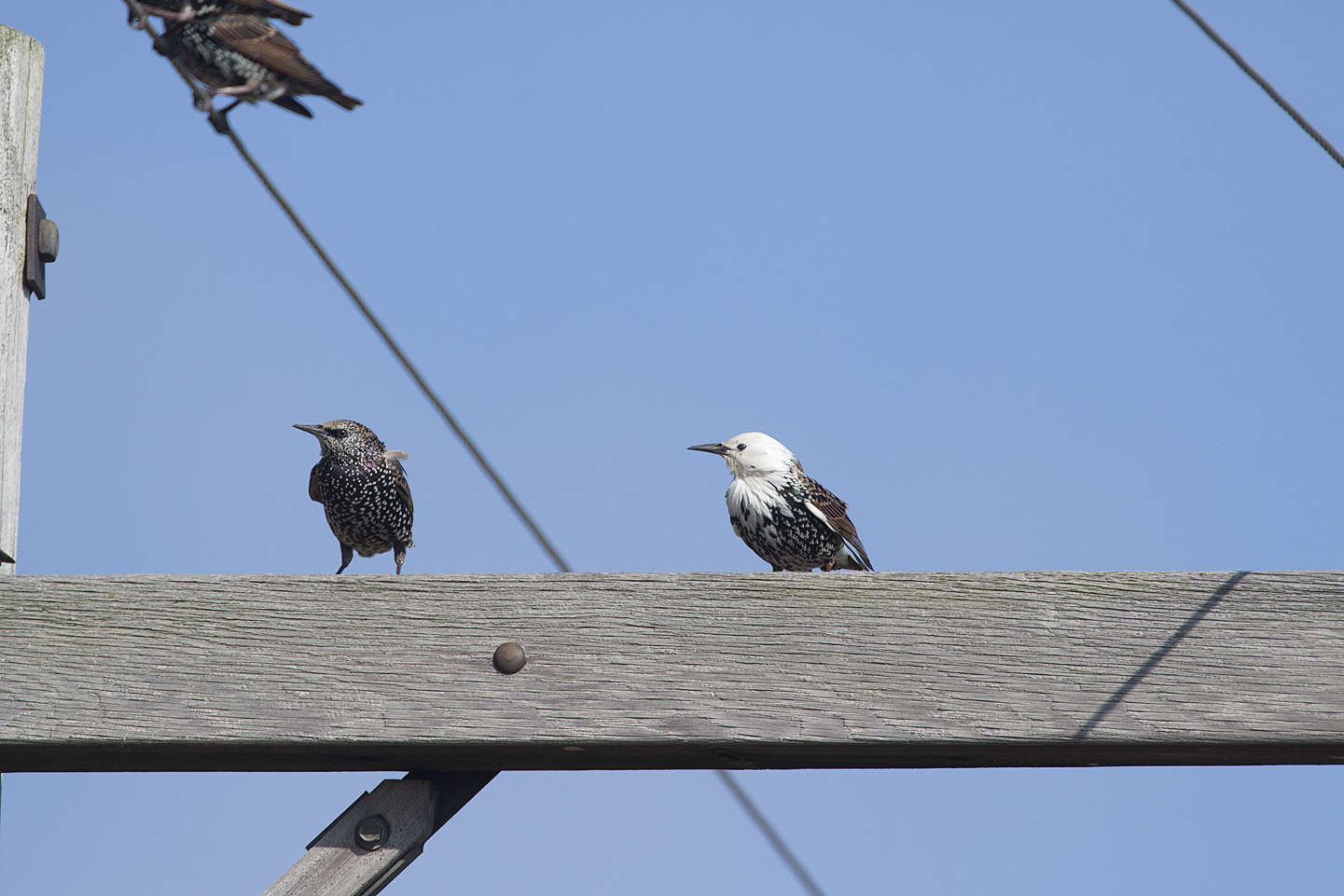 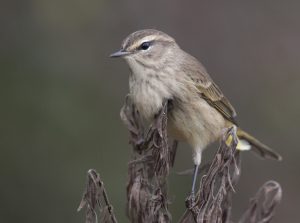 Palm warbler in its’ breeding plumage

September 14, 2017 – The Palm warbler is considered a medium distance migrant wintering in the Gulf Coastal region of the United States and the islands of the Caribbean west to the Yucatan Peninsula. The Palm warbler spends the summer on its’ breeding habitat in the low marshy areas of the Northern United State and the fens and marshes in the boreal forests of Canada which is quite appropriately known as “North America’s bird nursery”. The warbler can lay up to five eggs in its’ specialized grass nest lined with feathers and soft plants near the base of a small conifer tree or shrub. One photo shows a Palm warbler in its’ breeding plumage which was photographed in May during the northerly spring migration and the other photo shows a Palm warbler in non-breeding plumage captured this past week in mid September as the little warblers are heading south during the fall migration.